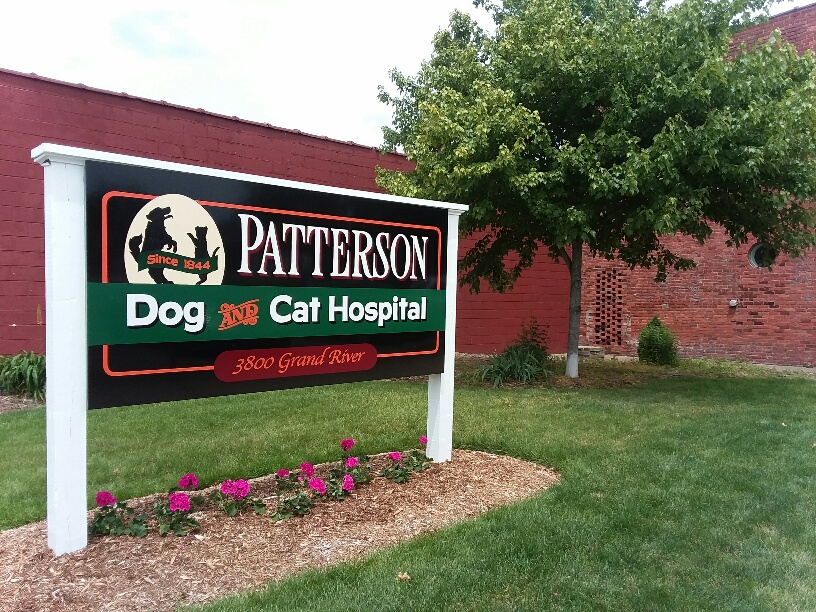 For more than 175 years, Patterson Dog & Cat Hospital has had the responsibility and honor of caring for Detroit’s animals. Established at 71 West Columbia in 1844 by Dr. James W. Patterson, an English immigrant and the only practicing veterinarian in Detroit at that time, the hospital has the distinction of being the oldest continuously operating small business in Detroit, the oldest veterinary hospital in the state and the United States, and one of the oldest hospitals of any kind in Michigan.

Patterson Dog & Cat Hospital remained in the Patterson family for three generations. In 1901, Dr. James Patterson’s son, Elijah E. Patterson, graduated from the Grand Rapids Veterinary Medical College and moved the practice to 591 Grand River Avenue. In 1909, he purchased property at our current location, and built a house and a two-story brick hospital. At that time, the hospital’s downstairs had room for 25 horses and the upstairs could house 50 dogs. It was considered state-of-the-art with its solid construction and steam heat throughout. Elijah would make house calls by horse and buggy and is noted for operating Detroit’s very first ambulance, a 1900 Horse Ambulance Wagon, which is now in the permanent collection of Greenfield Village.

Dr. Elijah’s son, James E. Patterson, joined the practice in 1926 and gave our facility its first and only renovation. The remodeling project converted the former downstairs horse stalls (no longer needed by that time in the Motor City) into examination rooms, labs, and boarding kennels for dogs and cats. However, the basic layout of the hospital remains unchanged since its inception.

In 1966, the hospital was purchased by Dr. Eugene G. Miller. Dr. Miller modernized the hospital, replacing the old wooden cages with new stainless steel cages that were easier to clean and installing insulation. He remained at the hospital until he retired in 1985, selling the hospital to current owner, Dr. Glynes Graham.

Having worked for Patterson Dog & Cat Hospital since she was 15, Dr. Graham understands and respects the hospital’s history and is committed to making its future successful by continuing to offer the highest quality, compassionate care to Detroit’s dogs and cats. Learn more about Dr. Graham.

Click here to read an article in the Veterinary Information Network News about our clinic!

Click here to read this article celebrating our history from the Detroit Free Press!

Click here to listen to our interview on WDET Radio!

Click here to read about our practice in Crain's!

Hours are subject to change. Call for availability.

Find us on the map